Enhancing the words – using music & the creative arts to communicate

It’s an end old battle; form versus function. Style against substance. Let’s consider the power of the creative arts to enhance what we’re seeking to communicate.

What is the purpose of music in the church? How prominent should it be? What style should our music group aim for? How much should we focus on improving the quality of the music?

Whatever your view, we haven’t got space to explore it here. Even if I was brave enough to pose some sort of answer (which I’m not!) there have been people before who have done this much more profoundly and eloquently. Not least, Bob Kauflin on his blog Worship Matters and his book of the same name.

In any case, that isn’t quite the discussion I want to have today. I want to focus on one element of musical worship in particular. And whilst it might at first glance seem trivial, I believe it’s actually the fundamental reason why music and corporate worship are intertwined – both Biblically speaking, and through the ages of the church.

Done right, music has the power to take something powerful, i.e. the words, and propel it to another level. The swelling emotion of a chord, or the subtle poignancy of a single held note, can enhance the message, driving it home with force.

Perhaps the above text needs to read ‘music should enhance’ – because it certainly has the power to do the opposite, too.

Done wrong, music can be a distracting force. This could come from a super-professional standard, which draws too much attention to itself. It could also come through something as simple as a lack of sensitivity with audio levels through the system. (Translation – it’s too loud!).

It could, on the other hand, also come from a low quality that suggests a lack of care and attention to the standard of the music.

Still, as long as we keep such issues in check, music certainly has power to enhance. The message that’s being enhanced can take different forms. Of course, in congregational worship, it often takes the form of sung words, or spoken scripture and liturgy.

These corporate actions in particular have further power, in that the congregation are actively involved: combining to form greater music than what the service leader, or the music group, can achieve by themselves.

Music and the spoken word

But there’s another form that we can often overlook – especially those of us in more traditional gatherings. Music can be used to enhance the preached word of a sermon.

I’ll pause to allow the shocked gasps from the pews to dissipate.

The spoken word can be enhanced by a musical accompaniment, provided that it is done with sensitivity. This does seem alien to a lot of us – it’s definitely not something I’ve encountered much in the UK church. We tend to keep things fairly formulaic and separate:

Actually, when we think about it, music and the spoken word are combined all the time.

Think about TV advertising – it’s common that an advert will have a musical soundtrack and a narrator speaking over the top.

Or taking another example – cinema. When we reach a climactic moment of a film’s story, it would be strange for there not to be an orchestral score underneath. One such case occurs in The King’s Speech:

The words of this speech are like any good preaching – they are passionate, inspiring and powerful. This is aided by the delivery, and of course by the context in which this message was given.

Still, the filmmakers made the call to add music to this already impactful scene – and I’m sure it wasn’t a difficult decision! The whole scene is lifted, and injected with even more emotion. Does this detract from the power of the words in the speech? Of course not! It enhances the words, and helps in the delivery of the message.

How does this relate to preaching? Well, I’m not expecting you to write a full-length orchestral score to run alongside your minister this Sunday morning. Besides the huge amount of effort this would involve, it’s simply too big of a jump.

Whilst your congregation are used to this sort of thing in movies or on the radio, it’ll probably be too jarring a change to your normal Sunday routine, and could therefore evoke a bit of a backlash. Too often, I’ve seen great changes being made too quickly, resulting in a negative response which prevents any further attempts at such change.

So how can we play with this idea of musical enhancement, whilst introducing it with sensitivity?

The first way is pretty simple, and is actually pretty common in other cultures/styles, from my experience. All you do is start the last song before the sermon has ended. As in, when there are a few paragraphs to go. Every church I’ve visited in the USA, for example, does this, and I always find it very affecting.

The first way is pretty simple – all you do is start the last song before the sermon has ended.

Starting a song in this way requires subtlety – too much too soon and you can distract from these last few points of the sermon. Obviously, this is absolutely not the point! Sermons tend to build towards a climax, or a challenge, so it is imperative that the music does not take away from the message. But it is this same climax that can make this strategy so effective, because the music can serve to enhance this high point of the preaching!

A final few notes on this technique. Song selection is important (which is true even if you’re not ‘fading in’ like this!). Some song intros suit a gradual introduction more than others, and this will also depend on the style of music your church uses.

It’s often easier to achieve this fade in with harmonic instruments such as a guitar or piano, as opposed to a melody instrument. These backing instruments are better at providing textures, which can serve the mood of the preaching without providing too much distracting musical detail. Better still, instruments which can hold long, padded notes are perfect (think keyboards/synths/electric guitars). Because these can be introduced even more slowly, the gradual fade-in can be easily controlled by your sound mixer.

Finally on this point, do make sure your preacher is not only aware that your musicians will be doing this, but also ensure they are comfortable with it. The last thing you want is to distract the preacher at the height of their message! Your musicians will need to work with the preacher to find the ideal time to start. Some sort of cue will be needed, whether that’s a specific phrase, or even the start of a prayer at the end of the message. 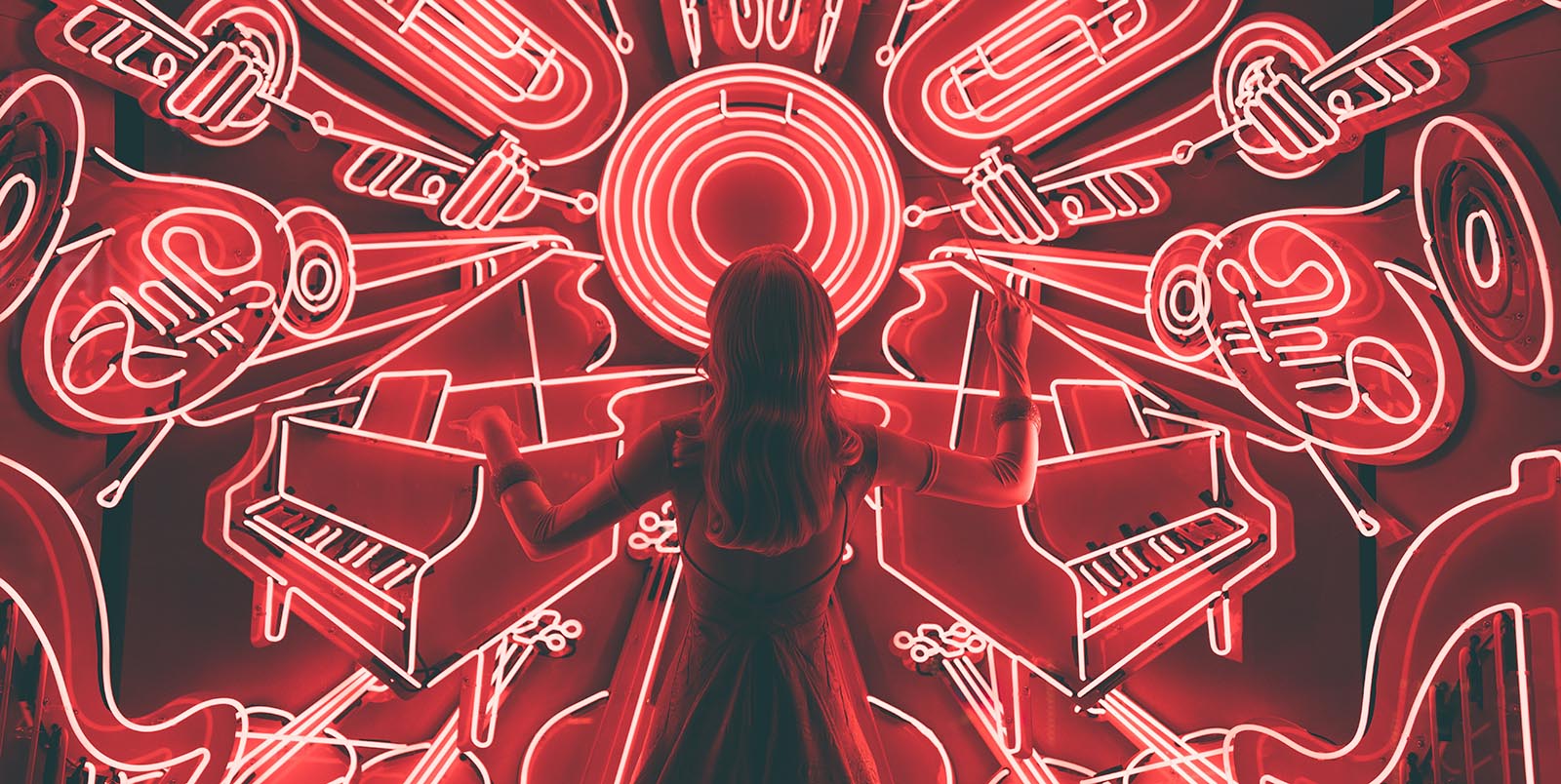 One other idea, then, for using music to enhance your spoken word: consider using a soundtrack creatively on your recorded sermons.

Whilst this may require more technical know-how, and more time to implement, it is also a safer playground. The relative levels of voice to soundtrack can be played with, and any mistakes can be corrected before they reach your congregation’s ears.

Adding music to your sermon podcast allows you to use tracks which have been recorded by other people (providing you’re aware of any copyright implications), so it also takes the pressure off your own musicians. With that said, you might have volunteers who could be inspired to create soundtracks for you!

Critically, this method allows for a relaxed listening environment to introduce this idea of music and spoken word to the more skeptical among your church.

Personally, this is something I’ve found really helpful in the past – to have music on in the background whilst I’m listening to some preaching. It’s dead-easy to experiment with for yourself, too. Just open up two tabs in your web-browser, one with a sermon, and one with some music.

There are a couple of examples below for you to try. Set the volume of each to a level you’re comfortable with, and see how you get on! (If you’re short for time, listen to the last few minutes of the sermon).

An important note; as with the ‘start the last song early’ suggestion, subtlety is key. It’s not a good idea, for example, to use music which has too many lyrics, as this can cause difficulty in processing too many voices at once. Stick with instrumental songs to be safe. Orchestral music is fine, as long as it’s not too busy, but my personal preference is to use the chillout/ambient genre.

Experiment, and see what works for you and your congregation – and don’t feel the pressure to go overboard! If you only want to include a track for the last few minutes, that’s a great way to ease-in!

Hopefully you can see that the driving force behind these ideas is not about trying to stir up emotion pointlessly. Instead it’s about helping the (already powerful) words to hit home: to pack even more of a punch.

In this vein, I want to propose that music is just one tool in our arsenal for enhancing the message that we want to communicate.

Music is just one tool for enhancing the message that we want to communicate. We have so many creative arts at our disposal!

Consider graphic design. Sure, we could just put words on a page in the default typeface, but this will result in an ineffective poster. Not ineffective because it doesn’t ‘look good’ as such (though it probably won’t), but because the purpose of a poster is to communicate a message. And if we don’t put thought in to the visual design, it will probably fail.

So instead of a white page with some bland words, we invest our creativity! We think about colours, fonts and images so that the design stands out. We spend time editing and refining the copy, so that the text is persuasive. And we end up with a result that visually enhances the message, so that we can inform, educate or persuade our audience.

Of course, design isn’t alone – we have plenty more opportunities to use the creative arts to further our message. The limit is our imagination, or indeed our inspiration – so let me inspire you! Spend some time writing down all of the things you do as a church which could be enhanced by some form of creativity. Maybe get a group of volunteers/staff around you to get all of our great ideas on to paper. The sky’s the limit!

All things considered, God made us to be complete people. ‘Words’, whether heard or read, are only one way that we take in information. We’re free to explore all the ways that we can communicate with people, so that they receive our message and act on it: whether that’s inviting people to a church event, or inviting them to saving faith in Christ.

So go and preach the gospel, and do it prayerfully: with words, music, design, art and whatever else helps people to hear what you’re saying!