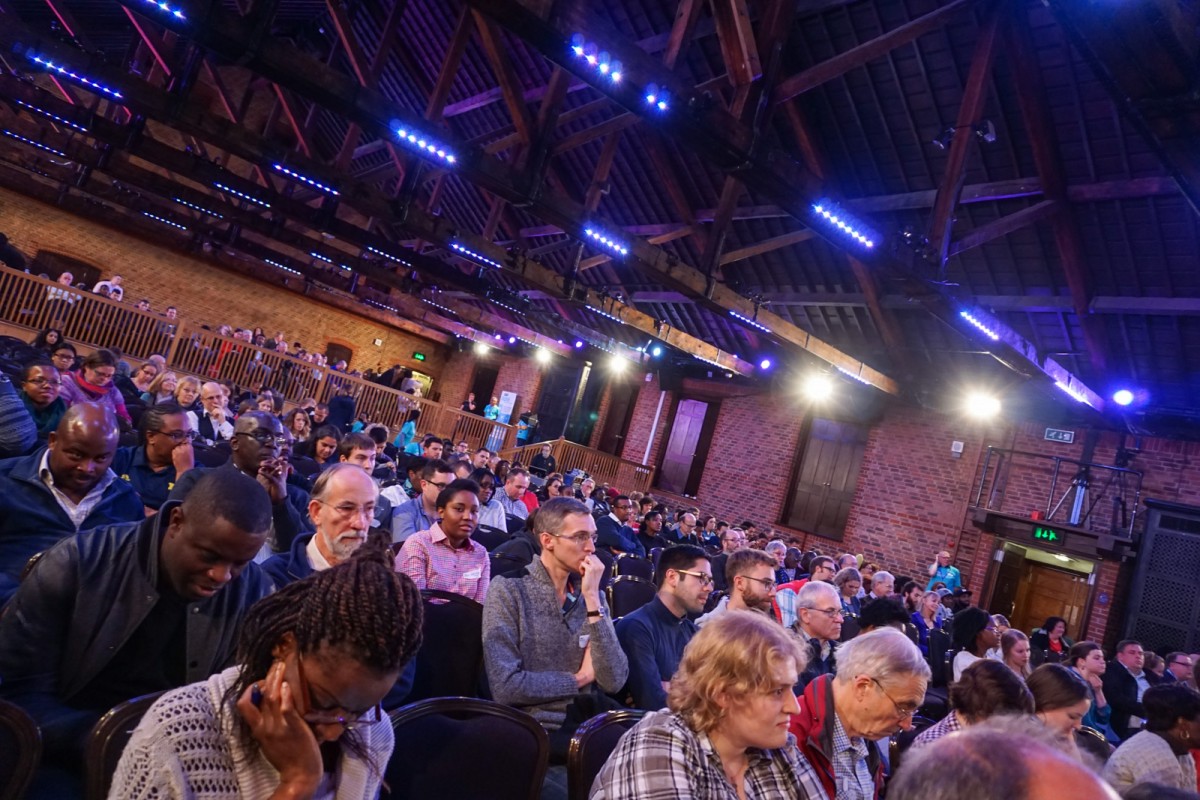 The day was Saturday and the time for the annual Premier Digital Awards and Conference had arrived. This year in particular was an exciting one for me – this blog was nominated in two categories in the awards.

As usual, and as promised, I tweeted a hideous amount using the #PremDAC15 hashtag. I’ll feature some ‘highlight tweets’ below, from myself and others, to help bring the day to life! You can also view some photo highlights from both the Conference and the Awards on the Premier Digital Facebook page.

So here we go, a review of the Premier Digital Awards and Conference 2015!

The opening address from Krish Kandiah came just hours after most attendees had learned of the horrific events that occurred in Paris, late Friday night. We spent some time in prayer for those affected by these events.

Krish talked about the importance of using digital communication tools for good, towards God’s Kingdom. This is a direct challenge to the attitude we can so often have, wanting to grow our following and, as it were, to build our own little online empire.

Krish also threw in this tidbit, which is always useful to remember in our communications efforts, both as churches and individuals:

Every year, there’s some kind of crisis at the conference. After all, who can forget #picklegate – the hashtag that got banned from the Twitterfall back in 2012 (#CNMAC12), after ‘film names with words replaced with pickle’ started to produce giggling during presentations.

This year, the crisis was caused by inflation.

I spotted a cheeky balloon hiding near the ceiling. Turns out it wasn’t just me that noticed, and the plot thickened:

The highlight of the day’s seminars for me was hosted by Tim Hutchings. We spent time examining discipleship, and how it is affected by the digital world.
We looked at the motives behind Facebook, Twitter and other services – even Christian technologies, such as YouVersion.

We considered how Facebook’s Edgerank and other algorithms are designed, not to help us to become ‘better people’, but to increase returns, to make a profit. So should we pack it in and abstain from the use of such products? Of course not, these are tools that we can (and do) use for the Kingdom, but we should also be aware that this is not their reason for existence.

One of the best parts of the Premier Conference is the online banter (see #balloongate for example). What’s even better is all of this online discussion is able to continue offline (there’s much genuine discussion amongst the pickles, promise). It’s great to be meeting with the people you’re tweeting!

After lunch, we were treated to another great talk, given by Andy Robertson aka @GeekDadGamer. Andy looked at the ‘spiritual spaces’ created by games, that give gamers the chance to create and to destroy. We looked at the similarities between video games and poetry – the way that certain information is withheld, with the narrative unfolding at the user’s own pace. This is different to other media such as film, where a limited running time dictates how stories are communicated.

This talk was also gamified, with Andy offering different amounts of points according to who tweeted his quotes first, with extra points for pictures. Now, I’m not usually competitive, but when it comes to speed-tweeting, that’s another matter. Needless to say:

One of the afternoon breakouts I attended was on the subject of ‘Creating a new humanity’. This session looked at film and television that featured robots or cyborgs, in an attempt to define what sets humanity apart. We asked questions such as ‘What is human’ and ‘What does it mean to fulfil our human potential’.

The day was rounded off by two ‘altogether’ sessions, the first with Lynda Davis (Senior Content Producer for BBC Radio and Music Multiplatform), who gave some helpful, practical advice about ‘who we are online’, including the following tips:

The final talk was given by Sheridan Voysey – a fantastic speaker and author. Sheridan explained how ‘ministry takes place in the low times’ rather than after we’ve come out of them. He also explained the difference between artistic attitudes of ‘Everything is beautiful’ (putting a rosy picture on the world, ignoring the bad) and ‘Everything is broken’ (where we present only the parts of the world that we want to see changed). The truth is that life is made up of a balance of these extremes, and that our hope as Christians is a true reality, addressing rather than ignoring the harder issues, not pretending that everything is perfect.

And so we come to the awards – a lovely evening, meeting even more new people and spending time congratulating others on their achievements.

There was live music and the food was fantastic. I couldn’t resist a quick food pic of this incredible chocolatey dessert:

So by this point, we were pretty tired – it was getting late, and some champagne and wine had been consumed. I was also starting to get a little nervous as the blog categories crept closer:

Well, eventually, the time came. First up, the ‘Up and Coming’ category. I was incredibly nervous as the two ‘runners-up’ were announced, and my name wasn’t one of them.

Then, suddenly, my name was announced as the winner of this category! You can see all of the nominees, winners and runners-up by visiting the Premier Digital site.

I had to give a short speech when accepting my award, something I discovered at the beginning of the evening. Still, as my categories were right at the end, I had a little time to think.

I mentioned that maybe it was time to come up with a shorter name for the site, something that I’ve gone back-and-forth on before: we’ll see!

I also spoke of how I had been weighing up whether to continue with the blog, right at the time that I heard about the nominations. Receiving the award has encouraged me to continue pursuing the cause, for the same reasons that I started the blog in the first place: to help churches, and particularly to help church volunteers in charge of communications to use digital effectively to share the gospel.

Shortly after this, the blogger of the year category was announced, and I’m pleased to say I was a runner-up in this category. Anyway, with all said and done, after a long day, we managed to catch a slightly earlier train home. It was a great day and I look forward to #PremDAC16! Were you there? Did you enjoy #PremDAC15?
Comment your reactions below!

8 things I hope the church doesn’t forget after coronavirus