What is a media asset and why should your church care?

Time for another guest post! To see my thoughts on guest posting and ChurchTrain, see my recent post here.

What does that mean?!

What is a media asset?

Until just a few years ago, video media was recorded and stored on magnetic tape. We were in an SD (Standard Definition) world. The media asset was not the tape itself, it was what was recorded on the tape: preaching, a story, a scene for a film, training/educational video or whatever else.

The asset is not the card, it’s what is recorded.

Creating a media asset is like creating anything else; it starts with an idea.

Here’s one example your church might consider, “I’d like to produce a video on our homeless shelter program.” You take the idea and develop it in to a goal: “I’d like to show our community that our church is helping the homeless in the area find jobs.”

At this point you’d have to find a willing volunteer to speak to camera or narrate – perhaps someone that you’ve helped in the past – and record some footage of them in action.

Now you have a ‘media asset’, the video recordings!

Next the assets get edited to tell the story. The finished video is now also an asset that could be used again later. That’s one simple example.

Another idea would be a poster. The finished poster is an asset because you can print and distribute them, hanging them in and around your church or community. But before the poster was finished, the same thing had to happen: you started with an idea. Then an artist put some creative thought and action into creating a product, guided by the goal.

As your artist works, they have to think of what assets could help the final poster. For example, what images, graphics or fonts would help to bring about the intended reaction; likely a call to action such as getting involved with something or attending an event.

Of course, some posters or publicity only have words. These words are an asset too! However, it’s likely the design of this written content is as important as the words you choose. Posters have artwork mixed in and special fonts; all assets that come together to create a finished media asset.

Naturally, audio is also an asset. Think about your sermon recordings, or other archive audio. These are all assets, that can be put to good use. Additionally, audio assets are critical when creating video, using elements such as voice overs, a music track, or sound effects.

Sometimes finished products are complicated with many layers of words, pictures, video or audio. But complicated doesn’t always mean effective; think of a movie that has a bunch of effects but the narrative is weak. You’ll hear people say, “Unbelievable effects, but I’m not sure it helped the storyline.”

All of your assets combine to make your final asset, your product.

The point is this, you develop one asset to create another, then you add to them to create a final product. It’s a process. The one thing that’s consistent is that they all start out with the biggest asset, your creative mind filled with ideas.

Still, in all of this, remember not to get lost in the detail – like the effects heavy movie with the terrible plot.

Remember the goal behind your product – the reason you’re putting assets together in the first place. Keep in your mind the audience you’re targeting, and the desired response you want from them.

As a member of your church, what can you do to begin creating your church’s media assets? Even if you’re just creating some simple video using your iPhone, it’s time to start building your library of media assets. 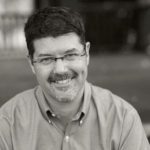 Michael has been in media production around the world since 1985 including: Broadcast TV, Corporate events, video director, on-board cameras for motor racing, and training teams for ministry media production.

He launched Pro-nounce® in 2011 and has been producing media for internationally with his fantastic team of actors, writers and producers. He’s been married for 26 years, has three daughters and lives in Nashville, TN, USA.

Voice Assistants and the Church

A Note on Guest Posts